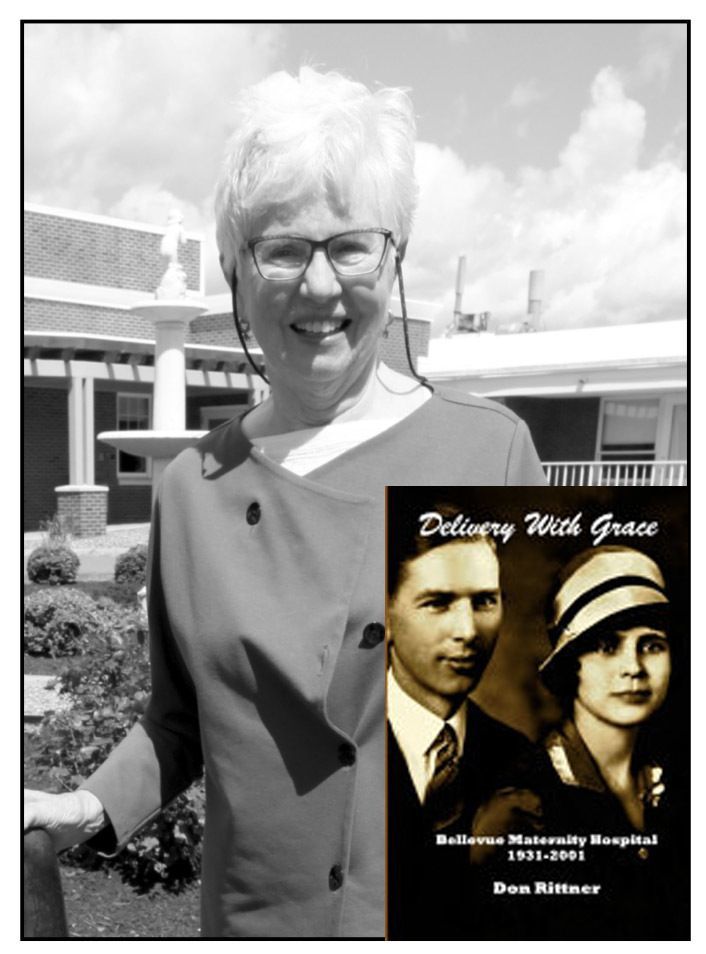 Residents at Coburg Village bring a lifetime of fascinating and diverse experiences to our independent living community. Most have had a positive, if not life-changing, impact on the world around them. That certainly can be said of Grace Jorgensen Westney, MD. In fact, Dr. Jorgensen has impacted the lives of the approximately 10,000 babies she delivered into the world, their families, and countless others at Bellevue Women’s Hospital in Schenectady.

Dr. Jorgensen’s recently published book, Delivery With Grace-– Bellevue Maternity Hospital 1931-2001, recounts the story of formerly named Bellevue Maternity Hospital from its humble beginning on July 2, 1931, in the Bellevue neighborhood of Schenectady through October 2001. During those 70 years, Bellevue was a privately owned hospital managed and operated by mother and daughter, Mary Grace Jorgensen and Dr. Grace Jorgensen Westney.

The book also includes brief biographies of several nurses, physicians, professionals, and support staff who were either employed by or had ties to Bellevue Maternity Hospital. It features a history of medicine in the Capital Region with a focus on influential local women physicians during that time.

The book’s connection to Coburg Village began six years ago when Dr. Jorgensen and her partner, Walter Grattidge, moved to our community. In the process of preparing for the move, they began sorting through a room filled with documents, photographs and other memorabilia tied to Bellevue Maternity Hospital, and determined that there was an important historical story that needed to be shared.

By coincidence, the daughter of one of Dr. Jorgensen’s college friends, who happened to have been an archivist at the Museum of Modern Art in New York City, had recently moved to the Capital Region and offered her services to sort through the memorabilia. Over the next two years, she organized and categorized the material with help from former Bellevue staff members. Initial attempts to write the book proved unsuccessful. A fellow physician and friend suggested that Grace enlist the services of Don Rittner, a local historian who had authored more than 40 books. Don already had a connection with Bellevue as all three of his sons had been delivered there.

The story begins in 1931 with Dr. Jorgensen’s mother, Mary Grace. She was a nurse and midwife in Schenectady with a very good reputation and a desire to serve the unique healthcare needs of women and their babies. At that time, due to social and economic pressures, most women were delivering their babies at home. Mary Grace and her husband, Elmer, were convinced that there was a better way for women to have their babies and decided to establish a maternity home in an abandoned parsonage on Bradt Street in Schenectady. There were six patient beds on the second floor and the family occupied the first floor. In the first year, there were 96 births. In 1936, they moved to larger quarters on lower Union Street. In 1942, Bellevue moved to the Stone Mansion at the site of the present-day facility on Troy-Schenectady Road in Niskayuna.

In 1959, Mary Grace passed away and Dr. Grace Jorgensen became owner and Medical Director of Bellevue Maternity Hospital. Throughout her long and distinguished medical career, Dr. Jorgensen’s focus was always on “the care of the patient.”

In 2001, changes in the healthcare landscape were making it more difficult to continue running a private hospital. In October, Dr. Jorgensen transferred her family-owned business to a newly created not-for-profit corporation bringing an end to the family’s 30-year connection with the facility.

In the book, Dr. Jorgensen acknowledges the great support she received from her late-husband, Howard Westney. There is a chapter in the book focused on his descendents immigration to the United States from England. The family was skilled in carriage building and established a major carriage business in Philadelphia. They later moved to Atlantic City where they created the famous push carriages which travel its boardwalk even today.

Delivery With Grace – Bellevue Maternity Hospital 1931-2001, is available on Amazon and through other retail outlets.