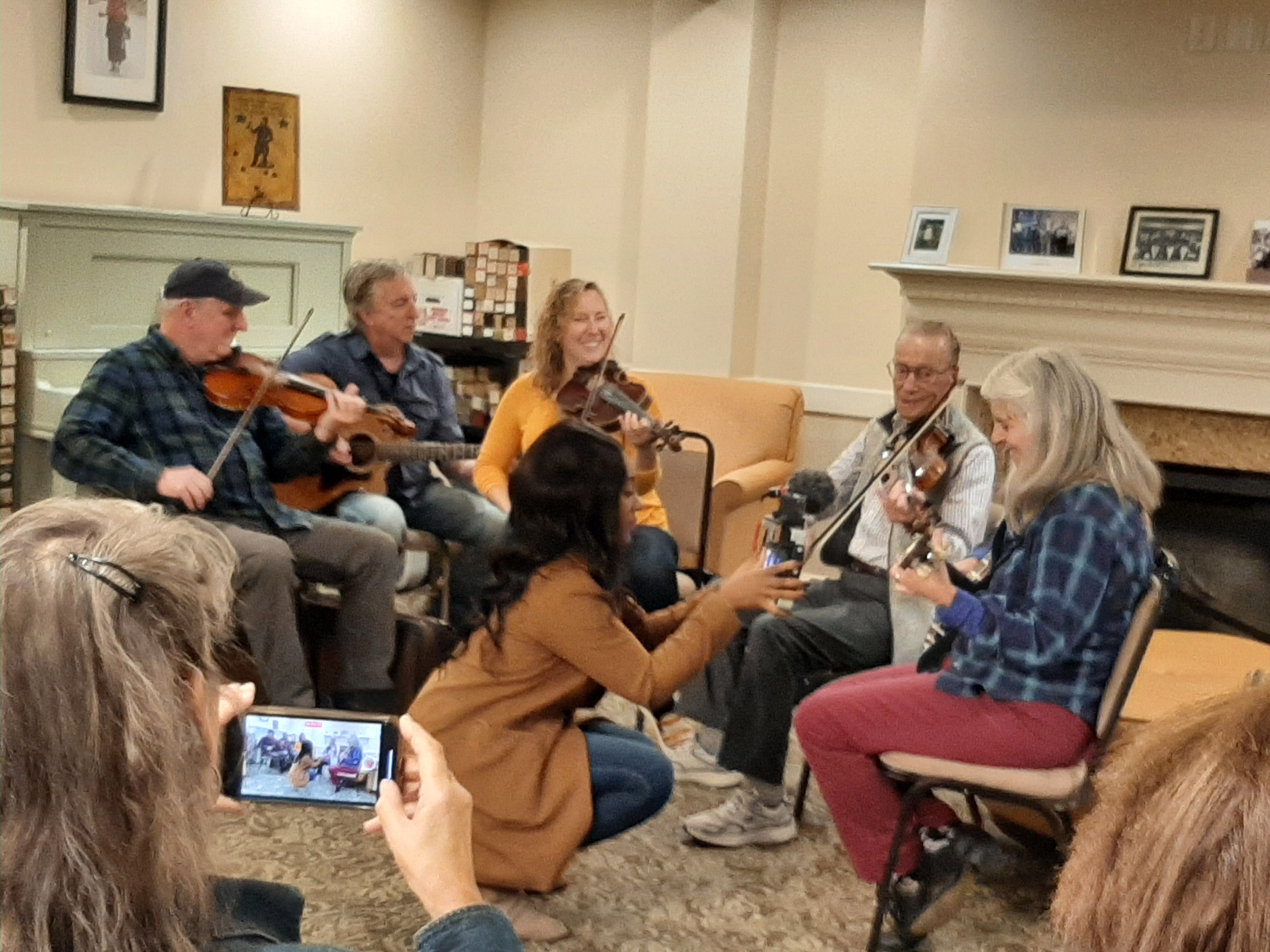 Throughout the summer and early fall, Coburg Village residents and visitors were treated to pop-up blue grass jam sessions in Coburg Village’s greenspaces and patio. At the center of these performances was 102-year-old Coburg Village resident Earl St. Onge. Playing music has been a part of Earl’s life since he was a young boy. His talent and love of music is a magnetic force, drawing fellow musicians who enter his path back for another opportunity to play with the inspirational centenarian.

Earl was born in Tupper Lake, New York, on New Year’s Day in 1920. When he was four-years old his family moved to Graham, North Carolina, where he attended grade school.

Earl had an affinity for making music from an early age, playing string instruments with his father and two brothers. At that time there was no television and radio was just coming into its own. The only other entertainment was listening to phonograph records. So, the family would pass the time making their own music. One brother played the violin, his other brother played the banjo, Earl the guitar, and his dad the harmonica. Earl and his family would often attend local fiddlers’ conventions. During the depression era, many families couldn’t afford to buy records so they would get together and play with other musicians at the conventions.

When Earl was fourteen, he and his family moved back north to the Oneonta area. He, his dad, and his brothers formed a family band. The band became well-known in the area mostly playing at dances. At one point they were playing six nights a week – but never on Sundays and never in bars.

When World War II broke out on December 7, 1941, Earl quickly realized that at age twenty-one, he was the perfect candidate for the draft.  He decided that he would take matters into his own hands, and in January, enlisted in the Army.  After training, he went on active duty in the South Pacific where he spent two and a half years in the jungles. Just before the United States entered the Philippines, Earl had enough points to come back to the States where he was stationed in California. Being happy just to be alive and well, Earl bought himself a Harley and decided to live it up! When the war ended, he hopped on his Harley and headed back east to be officially discharged. He travelled from California to New York on the famous Route 66.

Earl arrived back home to Oneonta to learn that his girlfriend had married someone else. Which in retrospect was a good thing, because he found a better girl – his wife Eloise!

Through the GI Bill, Earl was able to go to school for radio and communications. After graduating, he worked at Motorola; he then went on to General Electric; eventually ending up in its research lab.

He and Eloise lived in Loundonville, Watervliet and then eventually ended up in their home in Burnt Hills where they lived for 57 years. Together they raised three children, two boys and a girl. Earl and Eloise were married for 70 years. Eloise was a wonderful homemaker known far and wide for her amazing pie-making skills. She passed away six years ago. Earl describes his wife lovingly as one of the most unselfish people you will ever meet.

After the war, Earl’s brothers also went back to school and the family band dissolved. Earl’s love of music continued. Wherever life’s journey took him, he always found musicians to share his passion. At age 69, Earl started playing the fiddle.  He frequently attended bluegrass music festivals where he met and played with other musicians. Some of those musicians still come to play with Earl here at Coburg Village.

One of Earl’s favorite playing partners is Sara Milonovich. He met Sara and her family at a bluegrass festival when she was just seven years old. Even then, she was one of the most talented musicians he had ever met. Their families became great friends. Earl and Sarah have been playing together for more than 30 years. They’ve even attended fiddle camp together!

Sara now lives in Beacon, NY, and is an accomplished songwriter who leads her own band, Sara Milonovich & Daisycutter, as well as accompanying other artists. She has played with artists such as Richard Shindell, Pete Seeger, and Jim Gaudet and the Railroad Boys, and was a featured player in the Broadway musical, Come From Away.

Sara still shares Earl’s love for bluegrass and often visits him so that they can jam together. Many times, they play the tunes they learned together at fiddle camp. They are frequently joined by musicians Earl has met throughout his life, as well as musicians who have met him while preforming at Coburg Village, including the High Peaks group, Cedar Ridge and Frank Orsini.

After Eloise passed, he lived alone for two years with Becca, their cherished poodle – it was lonely. He decided to move to Coburg Village which Earl describes as the best move he ever made. When he first moved to Coburg Village, he wasn’t able to walk down his hallway without taking a break. He’s now averaging 4,500 steps per day.

Earl keeps his mind sharp by memorizing the first names of all his friends. When he turned 100, Coburg Village held a birthday celebration in his honor. He was able to greet all 185 people at the event by their first names.

Earl’s doctor is amazed by his continued good health and keen mind. Earl attributes his health to exercise and the good meals he enjoys at Coburg Village.

If you are lucky, you can catch one of Earl’s jam sessions. You might also hear Earl playing the fiddle inside his apartment with the accompaniment of a CD. His dog, Becca, likes his music too, sitting by his side as he plays.