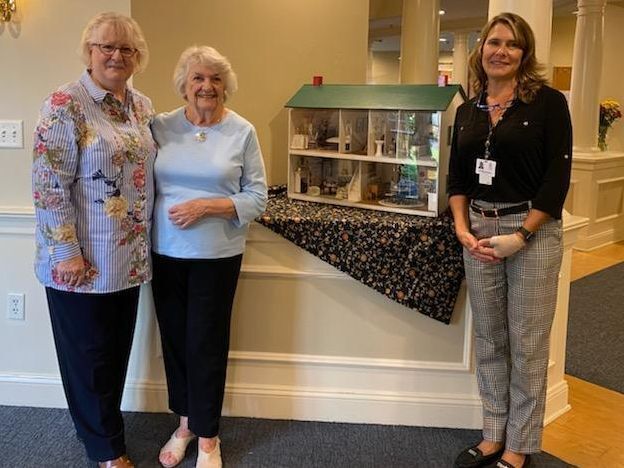 Coburg Village extends a very warm “thank you” to Linda Estes of Clifton Park for the generous donation of her handmade dollhouse. The meticulously decorated dollhouse is on display in the Coburg Village Rotunda across from the Country Store. Linda is a close friend of Coburg Village resident, Dolores Lambert.

Linda vividly remembers receiving the dollhouse as a Christmas gift in 1954. You might say that the gift was a bit of a family affair. She recalls that her dad had a workshop in the basement of their home where he built the dollhouse using a plan from Better Homes and Garden’s magazine.  Linda’s mom wallpapered the inside and her brothers bought the miniature furniture from Woolworth’s five and dime store.

When Linda went away to college, the dollhouse was retired to her parents’ attic. Her parents decided to move to a retirement community in the early 1990s, and she and her brothers where summoned to gather their treasured keepsakes from their childhood home.

Linda had always been intrigued by miniatures and decided to do some renovations and redecorate her dollhouse making it more of a collector’s item than a play toy. This labor of love took several years to complete.

Linda’s parents were avid travelers and if you look closely at the rooms, you’ll find several unique items that they brought back from their adventures. In the baby’s room you’ll discover a wooden red wagon with some alphabet blocks and a tiny brown bear a gift that her mom brought back from Germany. There, you will also find a small wooden billy goat that belonged to her mom when she was a child. In the dining room there are miniature platters on easels that were brought back from a cruise in Asia. On the living room mantel there is a tiny porcelain bowl from the Staffordshire factory outlet in England. Her dad built the walnut console table in the living room and above that table is a miniature pressed flower arrangement created by her mom.

Linda grew up in Newton, Massachusetts and attended Russell Sage College in Troy, New York. While in college, she met her husband, Robert, who was attending Rensselaer Polytechnic Institute in Troy. After they were married in 1966, they lived in several Capital Region communities, including Troy, Clifton Park, and Albany. Linda taught elementary school while Robert earned his law degree. The young couple eventually moved to Walton, New York, where Linda continued teaching and Robert worked in general practice. There, he was elected and served as county judge for 20 years.

When they retired, Linda and Robert moved back to Clifton Park. Linda met Dolores Lambert while co-chairing a bridge group at Schenectady’s Edison Club and they became fast friends.

Linda was downsizing and wanted to find a home for her beautiful dollhouse. While visiting Coburg Village, she saw the doll collection that Dolores has in display near the main entrance. Many of the dolls’ outfits were created by Dolores. Linda thought that our residents would enjoy the dollhouse.

She also knows that her parents would have been thrilled to see it on display and enjoyed by residents and their families here at Coburg Village!